~~ This is an original matched set of “WILLIAMS’ COFFIN” telephones with consecutive serial numbers 3413 and 3414. They were manufactured in early 1878 by the Charles Williams JR. electrical machine shop located at 109 Court Street in Boston, the birthplace of the telephone. This set of Coffins was found packed in a suitcase underneath the floor of a barn that was being torn down in Maine.

This set of telephones, known as “WILLIAMS’ COFFINS” because of their coffin-like shape, are believed to be two of the first few hundreds of “COFFINS” manufactured by the Charles Williams’ shop. They utilized a lever to switch from “BELL” to “TALK”, while “COFFINS” manufactured later in 1878 utilized an automatic switch operated by the weight of the receiver. Electrical power to operate these early “COFFINS” was generated by considerable vocal force directly into the receiver inducing a faintly audible sound in the receiver of a distant set. Batteries had not yet been adapted to the telephone. The plunger beneath the box had to be pushed in while ringing another party. The hand-held receivers were used both as transmitters and receivers; some installations used a single receiver alternating from mouth to ear in order to talk or listen and others provided two receivers, one for each function.

The “COFFIN” was the first telephone to utilize a magneto and ringer for signaling and one of the first to be used commercially. These “COFFINS” are stamped with their serial numbers, the patent date April 16, 1878, Bell Telephone Co. Mfr’s, and 109 Court Street, Boston. 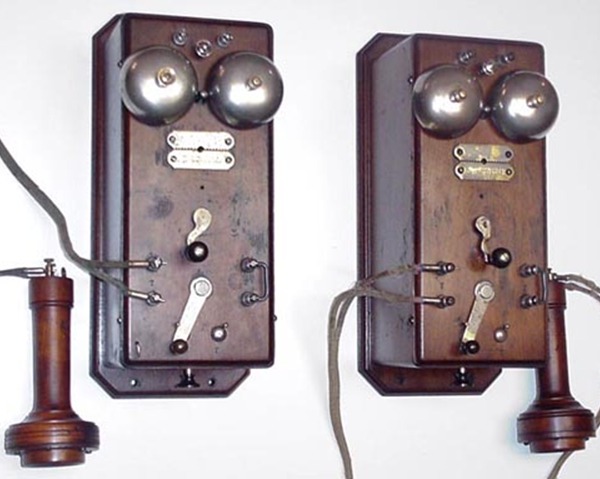 ~~ Alexander GrahamBell's 1877 wooden hand telephone.  It is referred to as a "Butter Stamp" receiver due to its similarity to an old fashioned butter stamp used for molding butter. The wooden receivers were replaced in 1877 by hard rubber receivers. 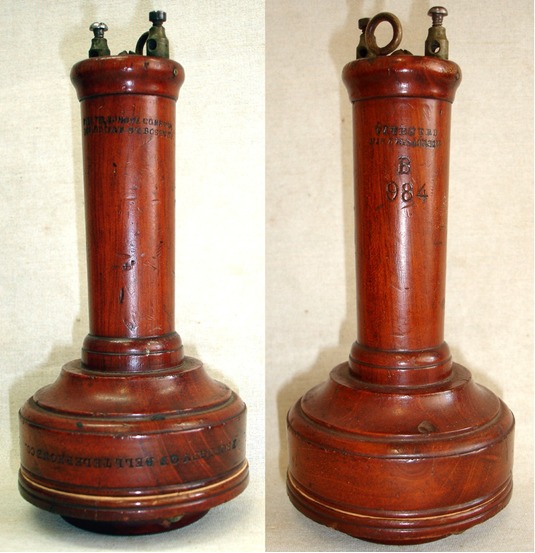 Click on photos for larger view and more info